There are a lot of things that newbies, tourists, and clueless foreigners do that Londoners or people who generally live here find irritating. There are two reasons for this: 1) cluelessness and 2) stubborn resolve to not conform to London/English etiquette.

I can't help the people determined to be jerks. (I'm looking at you Americans who resolutely refuse to apologise for being bumped into -I have heard your conversations declaring to one another that you will never be complicit in this seemingly backwards system that we also employ in Canada!) But for those of you who genuinely don't want to piss people off or are curious about why someone dressed in [likely expensive] ripped clothing, smoking a cigarette, and drinking a beer on the sidewalk is giving YOU dirty looks, read on.
10. Be a conscientious umbrella user
Being a wee woman myself, using an umbrella on narrow sidewalks is difficult. Raincoats and ponchos are a lifesaver for the vertically challenged. If you must wield an umbrella, hold it as high above the heads of the crowds as you can.

9. Be ready to swipe out
When you got off any train transport, you will need to swipe out with your Oyster card or put your ticket through. Scrambling in your bag to find your card while dozens of people are trying to get on with their day? Huge London faux pas.

Also, if you're on a longer trip outside of London, your ticket will be checked at least once on the train. Keep your tickets accessible.
8. Ask for the bill
When in doubt, ask for the bill. Service here is worse than almost every where else I have been in the world. Unless you're dining with celebrities and paying triple digits for your meal, you're probably going to have to ask for your bill. If people are queuing at the door, you've finished you're meal, and you think you're being polite by hoping someone will stop by with your bill: you're probably not. 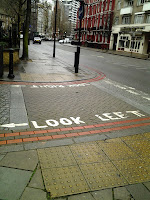 Pedestrians do not have right of way. Even if a car is turning onto a different street, it has right of way, not the people crossing. Plus, cars drive on the left, so for those of us from the 72% of the world that drive on the right, crossing the street can be particularly frightening. I have stopped many a tourist from walking into traffic since we moved here, despite painted explanations of which way to look on most corners.

Don't stress people out or be a burden on the health care system. Watch your step.

6. Don't travel during rush hour, especially in the morning
Basically between the hours of 8 and 10, stay off of the main London streets and off the tube unless it's necessary. Don't take the tube with your luggage during rush hour. Don't take your pet with you on the tube during rush hour. Just generally let people who have places to go at the busiest times of the day get on with it in the least painful way possible.

5. Be on time
Events start on time, or even early, here. I'm continuously guilty of being rightontime for events and squeezing in at the last minute. This is marginally rude but the odd person who is truly late for events is really stepping on toes (often literally). Be early. Everyone else was and doesn't want to watch you get to your seat when the show/talk/whatever has already started.

(Caveat: this does not apply to clubs, which the Irishman and I learned the hard way. We went to an event on time, weren't allowed in until 10 minutes after the venue had opened, and were the only ones there for over an hour. I have never felt older or more uncool. Spare yourself the embarrassment.)

4. Don't "red rover" the sidewalk
People who walk in a line across the sidewalk on Oxford Street are committing a massive urban sin. At most, walk beside one person. Rows of 4+ people taking up the whole path, walking at a leisurely pace, when there are thousands of people trying to get to their destinations are responsible for blood pressure spikes in Londoners daily.

3. Get in line
Queuing is a British pastime, as we all know. While everyone is in a rush when they are walking places, they come to a screeching halt once the goal is in sight. Butting in to join your friends is probably unwise.

Complaining is also a primary British activity, so feel free to commiserate with everyone else waiting in your vicinity.

2. Be quiet
That being said, don't be too friendly. Customer service here, see #8, is all about leaving people alone and getting interactions over with as quickly as possible. Small talk happens but it doesn't get personal. Generally, don't talk to people on transit. Keep your voice down when you do talk to people.

Coming from Canada, I feel like the volume here is set on "low" and several times I have questioned whether I am losing my hearing due to the quiet nature of communication. Then I go to a pub once people are a few drinks in and suddenly, my hearing is restored! Magic.

1. Walk fast, walk straight
Especially in Central London, walk as quickly as you can and in as straight of a line as you can to allow for people who know where they are going to get there. Sidewalks are full of zigzagging commuters trying to get around clueless tourists. This problem is so prevalent that multiple proposals over the years have suggested "speed lanes" on foot traffic heavy Oxford Street.

If you think you are lost and want to check your phone/guidebook/map, treat it like you're in a car and look for a good space to pull over that won't obstruct people before you stop.
Bonus ways people are jerks that should be common sense:


Really, this can be summarized as get out of the way. It may seem excessive but, unlike Hong Kong where density seems to have resulted in everyone being complicit in getting places very slowly, Londoners still want to get places in a reasonable amount of time. Whether you agree with it or not, you're going to be a jerk if you're taking up space.

It's inevitable that you will be in someone's way, hit someone with your umbrella, loiter at a restaurant, or generally irritate someone for a reason you can't pinpoint. When in doubt, apologise. The English love a good apology.

If you have any other tips on how to not piss people off in this excessively dense tourist trap of a city, please share in the comments!
Posted by Ange at 4:02 AM No comments: