As the avid reader/listener to a year of whining will recall, we swore last year that we would not stay in Shanghai this year. I was actually quite subdued about it on my Chinese New Year blog post, but overall we were bored and sick of listening to fireworks/firecrackers.
I strongly discouraged newcomers to Shanghai from sticking around. We are in an amazing location to fly to Sri Lanka, Thailand, Vietnam, the Philippines, Laos, Cambodia, Japan, to name a few places friends of ours travelled to this year.

But a combination of waiting too late and wanting to save some money led us to stick around, yet again. I was pretty confident I could do better this time around.

My mindset was one of anti-boredom. I had something planned one way or another almost every day of the break and a list of activities we could do when the mood struck. I knew from last year that museums and small shops aren't consistently open around Chinese New Year and just avoided them altogether. I knew from last year that most Western places would be open and that the fireworks on the New Year Eve (February 18th-19th this year) and the Fourth/Fifth Day would be epic.

Despite the lessons of last year, I discovered I had more to learn.

We were lucky that several of our friends were also in town for Chinese New Year this year. I organized a group to rent rooms at the Oriental Bund Riverside Hotel, a highly reviewed 5-star hotel in Puxi that overlooks the river. Or, wait, was it the Oriental Bund Hotel?

Yes, after hours of research, I managed to book the wrong hotel. Our hotel was located in Pudong, the wrong side of the river for the best views, and in Lujiazui at that, above a curve in the Huangpu River that prevented us from seeing pretty much anything at all.

So 9 of us all missed the fireworks on Chinese New Year thanks to my hotel booking fail. We still had a blast, singing and dancing until the wee hours.

Thankfully, due to my experience in 2014, I knew that I had a chance to redeem myself: The Fourth/Fifth Day.

My friend Solay has a sweet apartment downtown with a perfect view for fireworks. At my behest, she hosted a group of us for drinks and food and firework watching.

Everyone was pretty tired at this stage. People at the party had either been working or partying (or, in the my and the Irishman's case, getting foot massages) and were too tired to put up much of a partying effort. By 11 pm, having seen very few fireworks, we decided to call it a night.

30 minutes later, in a taxi on our way back to Pudong, they started. Epic, fantastic fireworks that everyone except yours truly got to experience. Yes, I crawled into bed in our 2nd floor apartment, while the Irishman walked Charlie, videoing the beautiful, colourful displays going off all over the neighbourhood. The other partygoers, who all live on higher floors, sent videos via chat app.

And now we all know that 11:30pm-ish is when to expect the Fourth Day show. Go figure.

T, my Toronto-based bestie, reminded me that I will not want for opportunities to see fireworks while living in China but it is still a bit sad that my two efforts at the biggest firework days of the year were thwarted by my own stupidity.

Not to toot my own horn, but we are now staycation pros.

We got the lazy part sorted. Watch the Oscars in bed for 3 hours? Massages? House of Cards marathon? More massages? Streaming NHL games? Why not 'eh? I have never eaten so many nachos in a 12 day period. 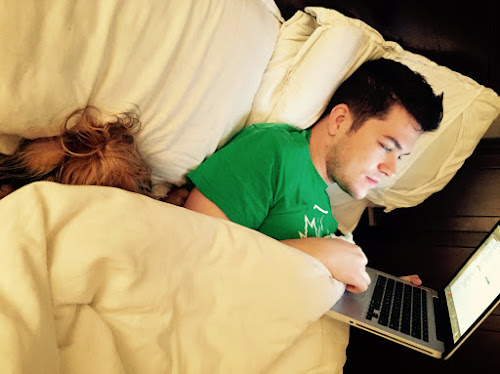 We were even a bit productive. We both got a bit of work done, which might seem depressing, but will make it much easier to get back into the swing of things tomorrow *cries*. We worked out, despite the Irishman's gym being closed for 1 month with no notice (remember what I said about stuff not being open randomly?). IKEA and shopping for bike supplies counts as productive, too, right?

Despite being in Shanghai, we even put the pup in boarding for 2 nights so we could go to our hotel party and chill out the next day without stressing about him. We had also taken in two buddies to babysit over the break: a colleague's daughter's hamster and a volunteer's guinea pig. I love animals and had a great time snuggling some extra four-legged friends!

Being at home (well, all but one night), we managed to save cash, despite eating out, drinking quite a bit, and getting our fair share of spa time in. We aren't tired from travel or sick from being cooped up in airplanes. There is no jetlag. I was stressed before the break that we would regret it but I think it worked out perfectly.

Plus, we're not handing in our expat cards yet --we'll be off somewhere tropical for Qing Ming holiday in four weeks anyway! Life in Shanghai is hard.

Last year felt very different. Some of it was due to us having friends around and me needing a break (vs being unemployed and bored) but it was an objectively different time.

Partly because of rain, there weren't nearly as many fireworks/crackers going off day and night.

It was very easy to get a taxi or Uber car in the weeks leading up to and including the break.

Next year, I mean it, we will not be here! We are planning to meet up with my cousin and her family. But even if we didn't, I feel much more positive about sticking around now that I think I do really have Chinese New Year in Shanghai down. The next time we are here over the break, fireworks or bust!!