Newfoundland: Worth the schlep! 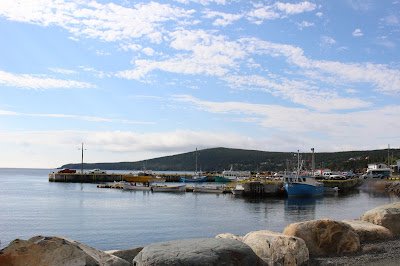 The Ferry to Newfoundland 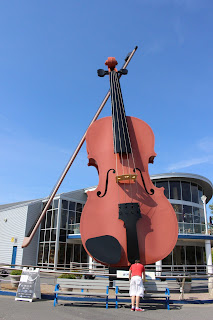 On our way to the ferry to Newfoundland, we stopped in Sydney, Nova Scotia, to meet up with a friend of mine from Shanghai (Hi Ian!) for poutine and beers. He advised us that the only real activity in town for tourists is posing with a giant fiddle. He wasn't kidding: there is a giant fiddle and we were not the only tourists who stopped to take a picture with it...

We took the overnight ferry both ways from Nova Scotia to Newfoundland. Departing at 11:45 pm on both ends, it arrives around 7:00 am on the other side.

For the first ferry, we bought individual seats and tried to settle in to sleep. Cabins had sold out more than six weeks in advance! Thank goodness for ear plugs and eye covers. The seats were not particularly comfortable and in a room of hundreds of other people, it was impossible to sleep properly.

Tips for the Newfoundland ferry:

Newfoundland is the most beautiful place I have ever seen. The view from trains through Malaysia, the Ring of Kerry in spring, and the surprise that was PEI do not hold a candle to the majesty of Newfoundland. 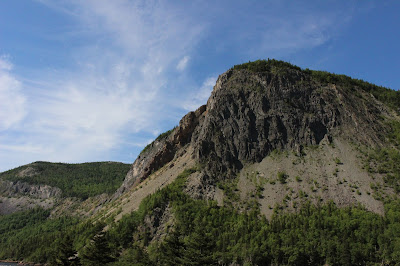 However, our extreme wonder was also offset by raw fear. Around 12 hours of driving through scenery that looked like it came out of a CGI'd fantasy film after very little sleep through long drags of torrential rain, potholes nearly as big as our car, few gas stations, 0 mobile phone reception, large vehicles passing us at high speeds, no shoulders to pull over on, and the realization we hadn't Googled what types of large animals may make us roadkill probably took years off of our lives. (Turns out there are moose and bears like the rest of the country, for future reference.)

Also, radio stations kept announcing hydroplaning warnings. Having no idea what hydroplaning is, and with no internet access, we could only imagine what risk we were putting ourselves in. (It is what it sounds like: your tires lose traction because of water and it's super hazardous.) 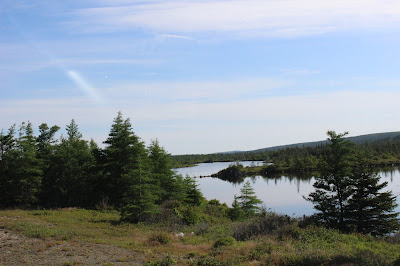 I will not do it justice with photos or my description of it, so I will just say, "Drive in Newfoundland [slowly, because of the hydroplaning thing]". You will crest over hill after hill where you get a foggy view of evergreen forests, then approach glittering ponds and fields of wildflowers as you descend. It did not get old over the days (of nail-biting terror) we drove from the ferry terminal to St. John's and back.

It is a blessing that the ferry is on the opposite side of the island from St. John's. We had no concept of what a natural wonder Newfoundland would be and wouldn't have made the trek otherwise!

An Unforgettable Day in St. John's

In stark contrast to the dud that was St. John, New Brunswick, our day in St. John's was a day of a lifetime. Yes, we have confused several people over the past year who think we are flip-flopping. I can say definitively of all the cities we visited over this holiday: St. John's was the best, St John was the worst. Of course the universe had to make it that way to confuse everyone.

We arrived in the evening at Lana and Roshni's Airbnb, stinking of sweat and tense from a day of trying to not perish on the road. Their place was perfect and they are a super lovely couple --highly recommended. We got some groceries, chatted to our hosts, and tucked in early so we could be ready for one of our trip "must-dos": whale watching.

Thankfully we left early, as O'Brien's Whale and Bird Tours was tricky to find as our GPS didn't quite have a handle on Newfoundland side roads. We made it with time to spare and were ushered onto a busy boat of tourists.

We saw thousands of puffins and common murres. Birds (and bird poop) everywhere. I was there for the puffins, but the "common birds" were adorable, penguin-like little dudes! 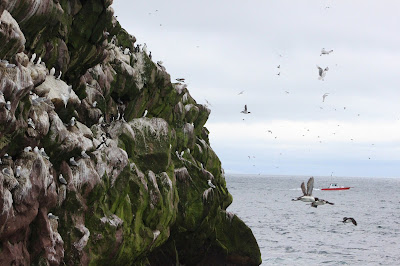 However, we didn't pay >$60 per ticket to look at birds. We, like all the other giddy people on that boat, were there for whales. And did we ever see whales! No matter where you were on the boat, you could catch a good view of minke and humpback whales doing their thing. We saw over a dozen minke whales, tricky to catch on camera as their fins just peek out for a moment, and a handful of humpbacks. It's really hard to get a good photo of whales, so I will leave it to the pros.

Our guide was charming and funny and the boat captain did a great job (as far as we can tell) of steering us towards the whales. The Irishman was even able to grab a beer to sip while he rolled his eyes at my sobbing at the miracle we had witnessed. Can you believe I was the only one on the boat crying? Really? Okay, fine, well maybe no one else was as touched by the experience but 10/10 for me, highly recommend.

Fail of an Afternoon

We had a few hiccups due to poor planning. Besides the boat, I hadn't booked anything and planned to wing it. Perhaps not the best idea.

Amusingly, I'm writing this post in 40 degree weather in Shanghai, exactly one year later. But on July 16, 2016, we were roasting in the 24 degree Celsius heat of St. John's (that's 75F for the one American who may accidentally read this).

After composing myself post-boat, we headed to Signal Hill, a military fort that overlooks St. John's. Both dressed in jeans, we were completely bathed in sweat after climbing the hill and had no water with us. We tried to make the most of it, taking photos, reading the captions in Cabot Tower history exhibits, and checking out the scenery. But we were hot, uncomfortable, and bored. After taking in the most incredible scenery of my life the previous day while being reminded repeatedly of my mortality, it was pretty anticlimactic.

An overpriced iced coffee and Coke later, we hopped into the car to check out the colourful houses that line the shore. We had seen photos before we arrived and thought "how hard could it be to drive over, park Sister B, and wander around"? We embarrassingly ended up getting lost and stuck in tiny, winding roads and having to reverse up steep slopes, narrowly missing other vehicles and people's porches. I don't even know how we managed it. Someone on TripAdvisor suggests going to the tourism office on Water Street and using a map from there. Noted for future reference. Sigh.

Dejected, we admitted to our amazing Airbnb hostesses that we had failed miserably at being tourists over the course of the afternoon. Ever helpful, they wouldn't let us give up hope on the rest of our day. They helped us to figure out where we would be "screeched in", another requirement of being a tourist in Newfoundland.


The "screech-in" is for non-Newfoundlanders ("come from aways" or "mainlanders") to be initiated in a ceremony to become honorary Newfoundlanders. On Lana and Roshni's recommendation, we called ahead to a couple of bars that are known to perform the rite well, and the popular Christian's had a few spaces still available that evening. FYI -this is not necessarily something you can just walk into. The times are scheduled and can fill up!

After eating a surprisingly decent poutine at Green Sleeves pub down the road, we headed upstairs at Christian's for the ceremony. It was hilarious. An epic monologue about Newfoundland was followed by offerings of "Newfoundland steak" (baloney pieces), kissing a [frozen] cod, and then a shot, of course, of screech (rum). We recited a few key phrases and walked away with certificates we managed to hang onto the whole way down the street as we bar hopped. 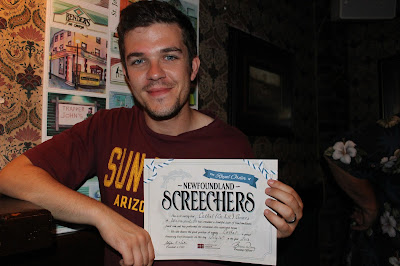 Sadly, we had to leave the next day. Knowing we had a long drive ahead which could involve any number of hazards, we left early and didn't get to enjoy any more St. John's flavour.


Like everywhere on the east coast, the culture and accents seemed halfway to Ireland, making us feel right at home.

Next time, maybe we'll try it in a bigger car, though... 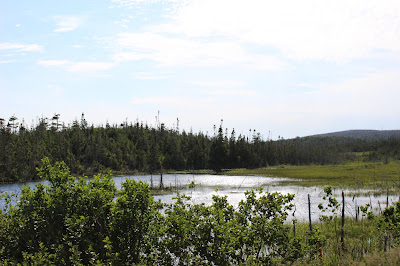